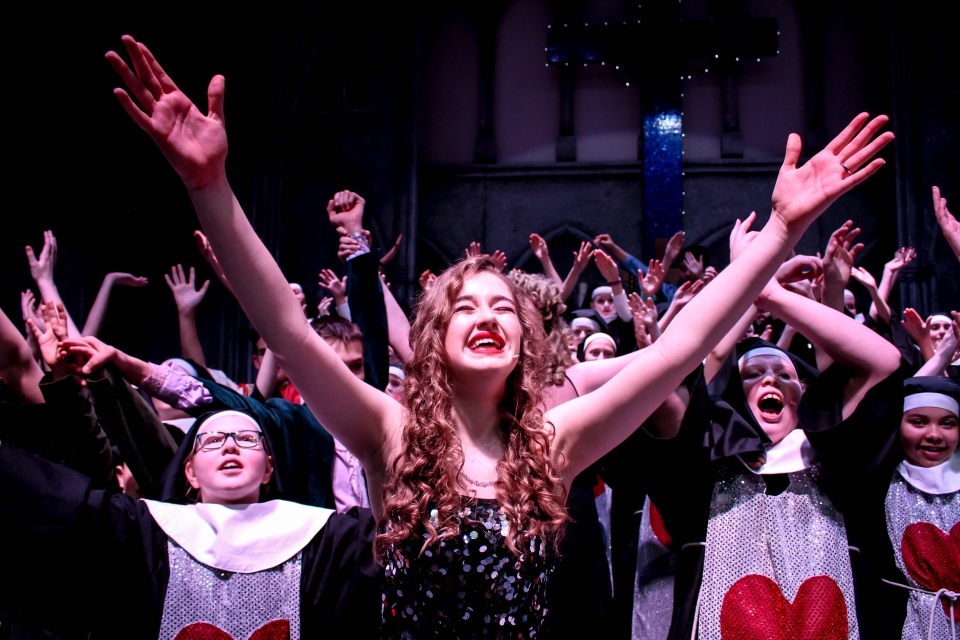 A huge well done to all the students and staff of Newark Academy Family of Schools, who celebrated the arts with their musical comedy ‘Sister Act’ in February 2018.

Alongside the cast of Newark Academy, 28 students from Chuter Ede Primary School, Barnby Road Academy and St Peter’s Cross Keys Church of England took to the stage with an array of songs and acting to tell the tale of Deloris Van Cartier (played by student Ella Mahon in Year 9), who seeks refuge in a convent having witnessed her gangster boyfriend's involvement in a murder. The convent, run by a traditional Mother Superior (played by Hannah Davidson in Year 10), steers Deloris to training the convent sisters to sing—which attracts national and international results including a visit from the Pope himself (played by Mitosz Rabus in Year 11).

Head of School Mr Seymour said: “‘Sister Act’ has certainly celebrated the amazing community spirit that the arts can bring to education. Our production provides our entire school community with a real opportunity to showcase the amazing talent our community possess.”

Mrs Sadler, Head of Performing Arts at Newark Academy, expressed how proud she was of all the staff and students of Newark Academy community in putting on such a fabulous show: “The commitment to rehearsals and new friendships that were created throughout the creative process really highlighted the impact that theatre and the arts have on us all, our young people, the staff team and the audience who share our passion.”